A few days ago, one of my students posed a question to me during my creative writing class – “Aunty, why are we always told to be kind to others? What will happen if I’m not considerate?” I don’t know why, but this question took me back to my childhood. Not because I ever asked my parents and teachers the same question, but because I remember that as a child, I could never fathom why my parents went around helping “the whole world”.

An instinctive smile flashed on my face as I responded to the child in a rather simplistic manner – exactly the manner in which I understood the raison d’être behind my parents’ random acts of kindness as I grew older. The child got it in a jiffy that when we do something for others, we are actually doing it for ourselves because that goodness stays in this universe that we are a part of. The world does not become a better place through the action of unseen forces but by the sum total of our small or big good deeds.

While I imbibed kindness as a way of life from my parents, there is this one man who is on a mission with his undeterred efforts to make kindness a movement that has the power to transform the world. Rushabh Turakhia, an MBA by qualification and a diamond merchant by profession, has created a potent labyrinth of righteousness and goodness using a simple concept. The idea germinated in his mind because of the movie “Pay It Forward” starring Kevin Spacey, Helen Hunt and Haley Joel Osment which released in 2000.

This idea took the shape of “Your Turn Now” (YTN). In a matter of a few weeks, the implementation was that rapid! The first lot of “Your Turn Now” cards were sent out in December 2009 and there has been no looking back ever since.

How does it work?

It is pretty straightforward really. Do good to someone, give them a YTN card and in return ask them to do good to anyone in any way they can. The card keeps getting passed on and triggers a chain of kind acts. Now, one may argue as to why we need a card to ring a bell for us to be kind. Should we not be wired to perform such acts of kindness by ourselves? Well, ideally, yes. But humans are complex beings. Every now and then, we need that external spark to ignite the kindness which is lying inside us, sometimes latent and sometimes just waiting to elevate its head. The reality is that in the daily grind of our lives, we need reminders to stay rooted in the basics of human existence.

When Rushabh began his YTN journey, his humble endeavour was to reach an annual count of 5000 YTN cards. However, he was amazed by the response to the movement as he reached a staggering figure of 25,000 cards in the first year itself.  As of today, more than half a million “Your Turn Now” cards have been dispatched and distributed in more than 44 countries, and Rushabh gladly declares that another 100,000 cards are all set to go for printing. 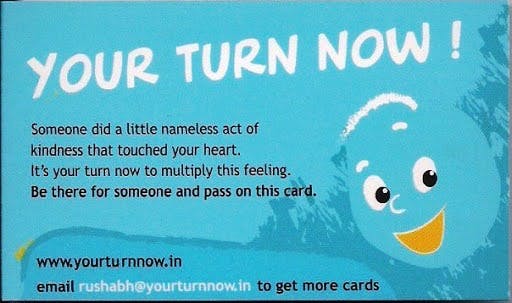 When I was talking to Rushabh about his initiative and his vision, I could hear passion and enthusiasm so strongly in his voice. That kindness runs in his veins and is steeped in his every bone was palpable from miles away. However, all along, I was curious about how the finances were being managed to keep this movement going. It was obvious that Your Turn Now is not a venture in the conventional sense but what about the various costs involved, I wondered?

I was pleasantly surprised to learn from Rushabh that most people associated with him on this project are as passionate about spreading love as him. He was not charged a single penny by the person who designed the card and created his website. Even the printing happens at cost, repudiating profits of any measure. And whatever are the printing expenses, they are borne by Rushabh without any expectation of monetary returns. He does not even look for donations from anyone for his project; all he wants is to make this world the place it deserves to be. 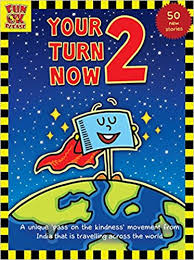 What particularly impressed me about Rushabh’s work is that he has two awesome Your Turn Now books to his credit. As a parent, it becomes so much easier to explain life concepts to my child by simply reading a book about them. Raising the next generation with the right values is of utmost importance in this era and the YTN books provide the perfect support to parents and teachers to achieve this.

The books narrate real accounts of people who performed a kind deed to uplift others. The stories are varied bringing out the underlying idea that there are countless ways to be kind. The narrative is simple and engaging because of which the child is hooked throughout. Honestly, if you ask me, you do not need to wait for your child to be of a certain age to get these books. My 3-year-old loves both the YTN books and now she not just understands the stories but also implements what she learnt from the short tales of kindness in her life. The YTN books were selected by Crossword as “Best of 2013: Children’s Writing” and by Amazon as “Most memorable books of 2016”. 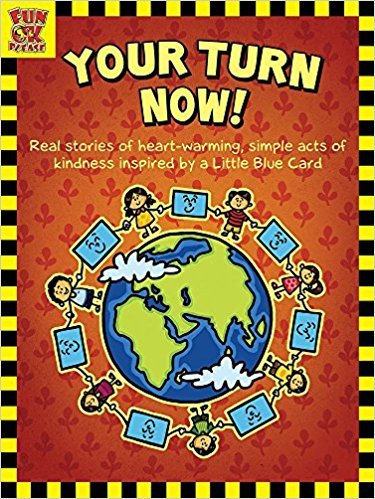 ##This article, written by Anupama Dalmia was first published on Youth Ki Awaaz.